Yesterday, I along with other invited bloggers dined at Tijuana Flats, fast casual tex-mex restaurant located in Bradford Shops — Cary’s premier shopping and dining destination. “Tijuana Flats has grown to more than 130 restaurants in six states and there are five locations in the Triangle area.” explained Area Marketing Coordinator Sarah Jones, whom facilitated the event. The Hidden Menu Tasting gave local bloggers and influencers a chance to enjoy their entire super secret menu. We also enjoyed complimentary beverages and all while learning all about Tijuana Flats history and its menu offerings! 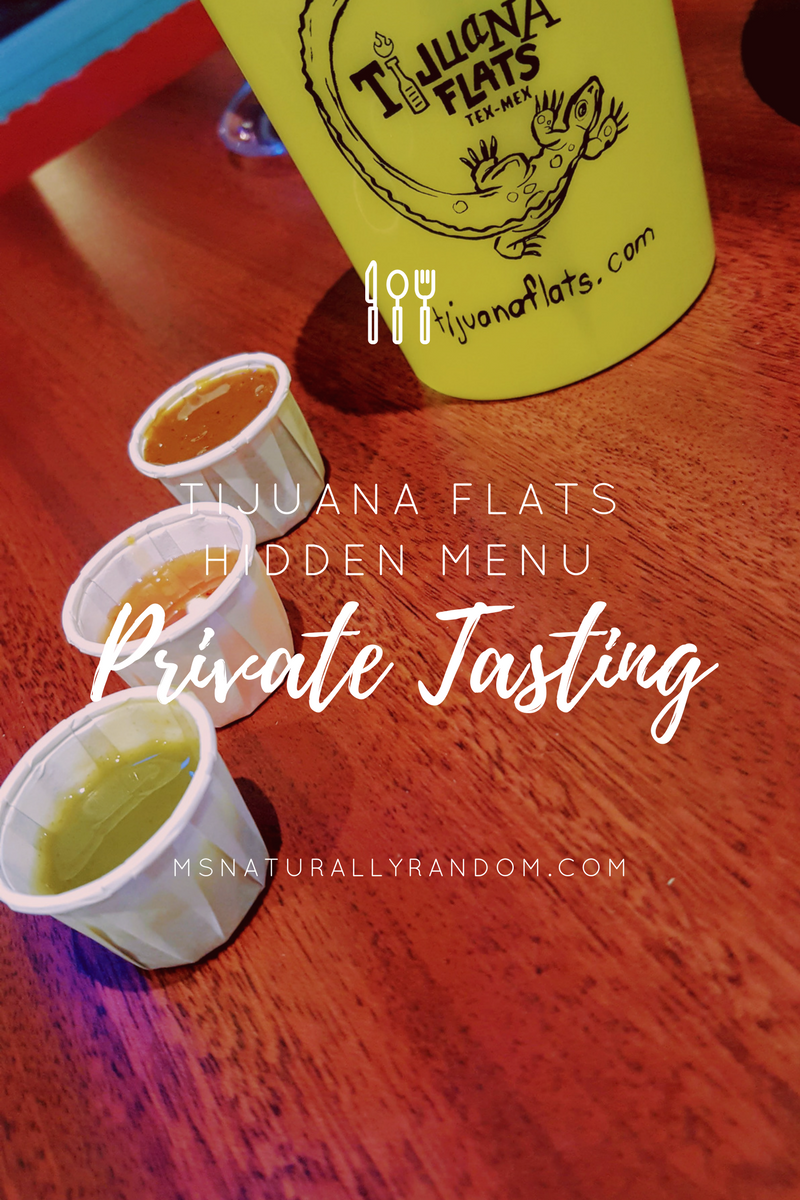 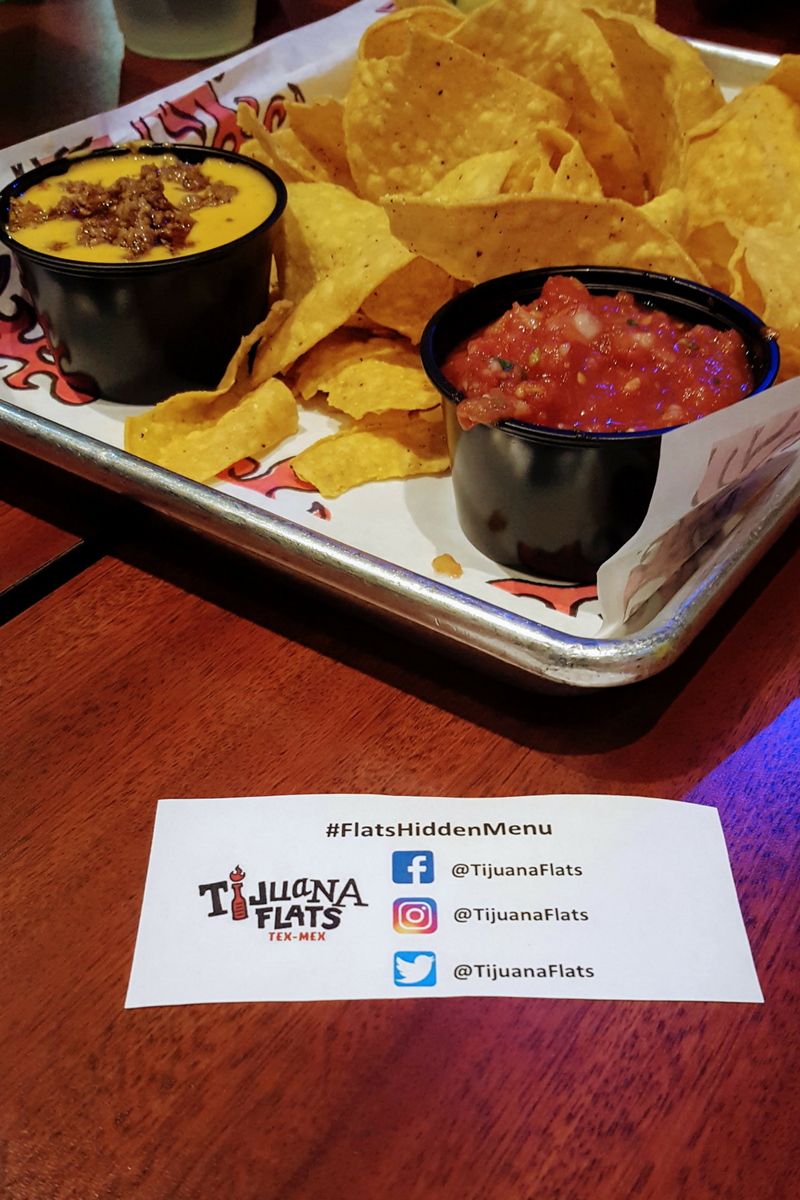 We were served the Tijuana Trio, which is warm chips, handmade salsa, guacamole and queso. Sounds simple enough, right?! Yet this was #FlatsHiddenMenu and we were served Queso Con Carne instead. I guess they know, just like y’all do, everything tastes better once it’s served with a little meat in it. Side note: I immaturely giggled way too long after I wrote that sentence.

Quick question, have you ever wanted a jalapeño popper but wrapped in a warm crispy flauta? Well you will have to come in and ask for Atom Bombs. You won’t find these on the menu and they’re not always available but if they are, definitely give this appetizer a try. 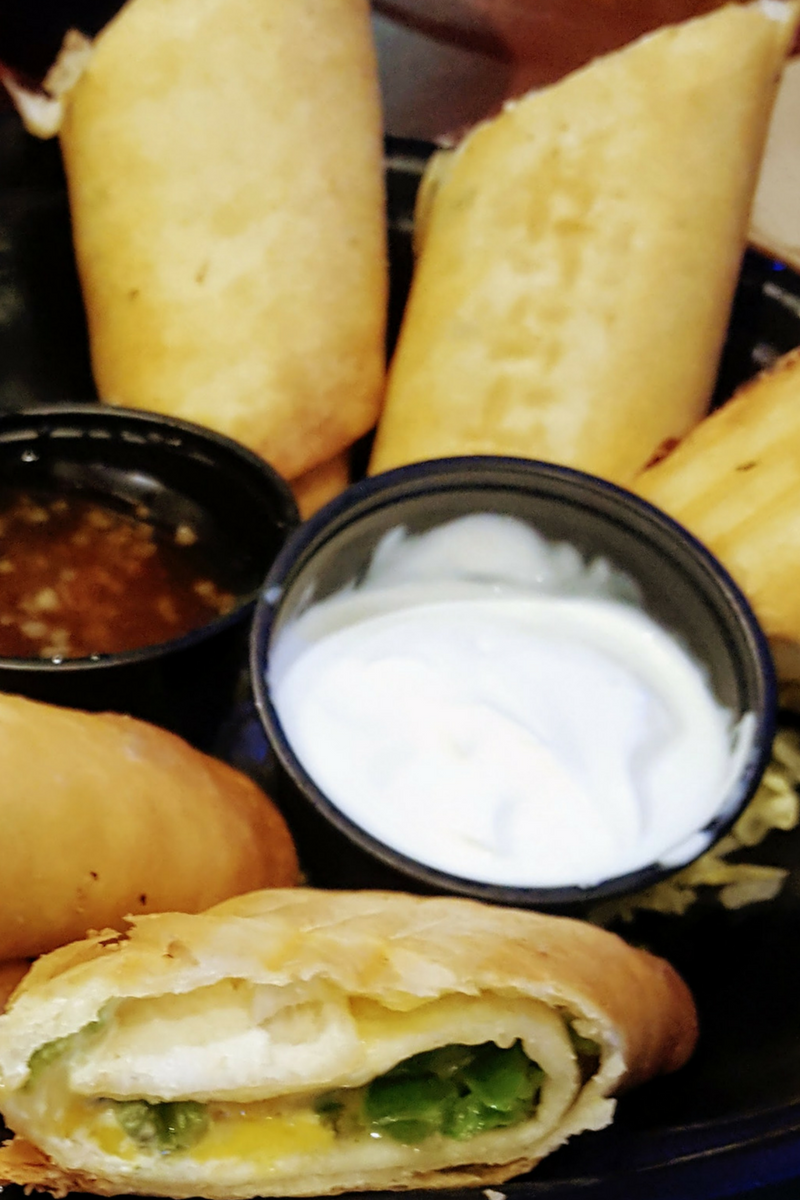 I’m told the Atom Bombs have a cult-like following when they are available. It is basically the appetizer you didn’t even know you needed.

Moving on to the next course, Entrees:
Mexican Pizza – Fried tortilla, red sauce, melted cheese, choice of protein and toppings.

This one was a little tricky to get from plate to mouth without feeling like there was an impending shirt stain ahead but honestly it was my favorite of the night. We were served both chicken and beef varieties. Now, I grew up eating only experiencing pickled jalapeños. Though I must admit, initially, I felt that chomping into a fresh piece of jalapeno would be an acquired taste but doggonit as each course progressed, I developed such taste! Tijuana Flats prides itself on that fact that this is Tex Mex made fresh, nothing came from cans. I have been converted. I too shall join the fresh jalapeño masses! (whispers, fresh peppers are cheaper than a jar anyway!) #FrugalLife

If you like your tacos big, then the Double Stacks are for you! I love tacos and I seriously couldn’t finish it. As I sat there, staring down the first ever unconquerable taco I’d ever contested, I was struck with a thought. February, the lover’s month, is right around the corner. A few of you may be trying to stick to your Financial resolutions but you still want to share a time with your honey bunny! You know what, why not split a tray of Double Stack Cheesy Tacos with your sweet thang! Ain’t nothing wrong with being “Frugally Romantic” for bae! 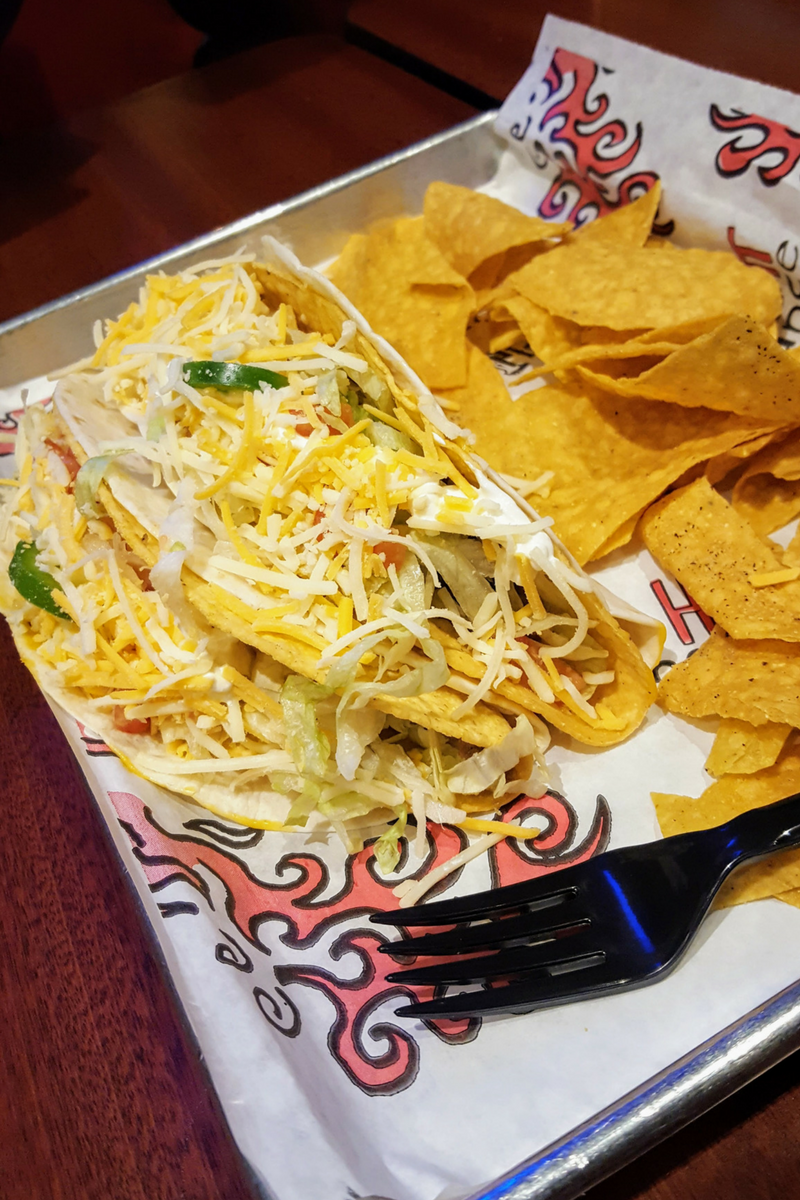 Before I wrap up Entrees, I have two honorable mentions. We’ll just stick to calling them honorable because literally everything was worth mentioning but I was too busy stuffing my face to capture it. I guess it all worked out though because this just gives you more of a reason to stop by a location near you.

First honorable mention goes to the Tijuana Flats HOT Bar! A hot sauce bar can be found in every location and features more than 10 varieties of sauce that range from mild to sweet chili sauce to “you’re a self-hating glutton for punishment” type of diner that enjoys face melting habanero sauces. Jones explained, “Founder Brian Wheeler is also the creator of the Tijuana Flats Smack my Ass & Call me Sally line of sauces.” (yep, he totally named his sauce that, it’s good though) 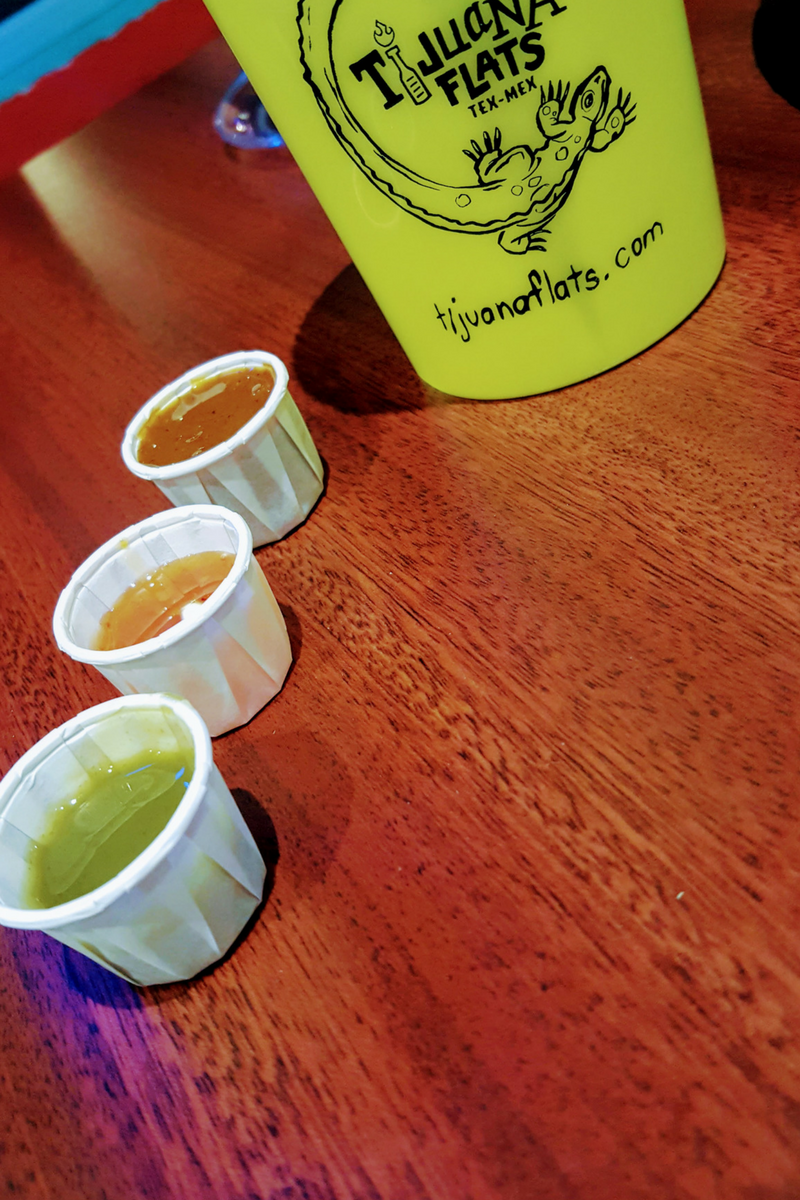 Here are a few we sampled. I love spicy foods by the way but if you think I’m exaggerating, the bar literally has a disclaimer above it that reads, “Use at your own risk! These sauces are extremely hot! Children are not allowed at the Hot Bar.” #ijs 🔥🔥🔥

Second mention, we were offered our choice of TWO complimentary drinks. 🙌🙌🙌 They offer soft drinks, Mexican drafts and a few wine choices. Well on this night, Mama was definitely kiddo free and decided I deserved a little sippy cup of my own! Hmmm, maybe a #RandomMomsNightOut location in the future? I had the Sangria and it was really tasty. The presentation took me back to my college days for a minute. (whispers hint: it’s in a plastic cup)...

Lastly, Dessert:
Cookie Dough Flautas – “The Original” chocolate-chip-cookie dough loaded in a flour tortilla, lightly fried and topped with powdered sugar. Served with a side of chocolate syrup.
This really reminded me of something you would think that you would find offered at a State Fair vendor. One of those zany food fusions that you're willing to try because it totally numbs the pain of your feet walking miles around a crowded fairground with screaming adrenaline junkie children and the adults that feed them. With all that said, you probably guess I'm not a fried twinkie, battered oreo, red velvet funnel cake girl, but you would be guessing WRONG. 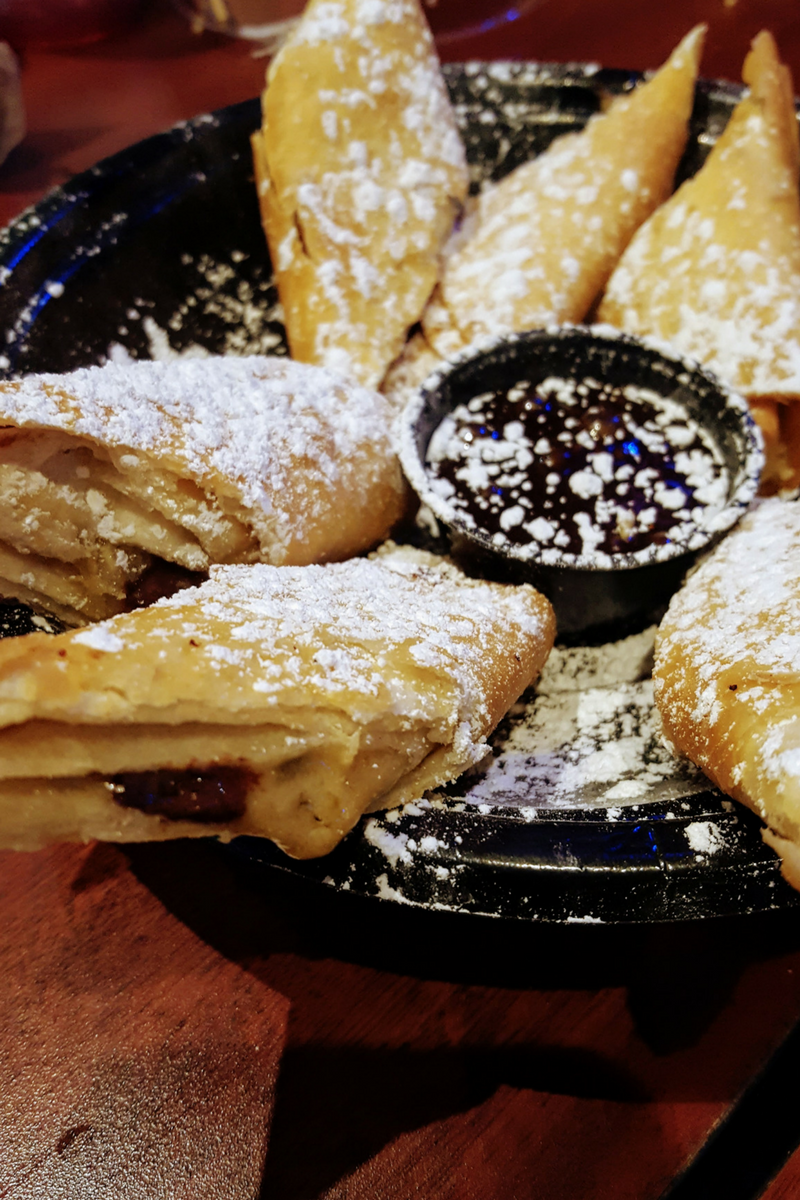 Long story short, I loved this! Now, this is currently on the menu but I'm not sure if it's a permanent feature. Quick thought: Here's another "Romantically Frugal" idea! Grab an order of Cookie Dough Flautas to go and split a pint of vanilla with your Sugah!

Now you know, Tijuana Flats customers can customize their experience by adding in a few items from the Hidden Menu. Get all of your fresh tex mex tastes and sips fulfilled at one of the 5 local locations. For detailed menu information, visit the website at www.tijuanaflats.com. Follow Tijuana Flats on Facebook, Instagram, and Twitter for updates, promotions and new menu items. #FlatsHiddenMenu #RandomEats

Disclaimer: Food at the restaurant was provided complimentary but please know this review is honest and a reflection of my dining experience.